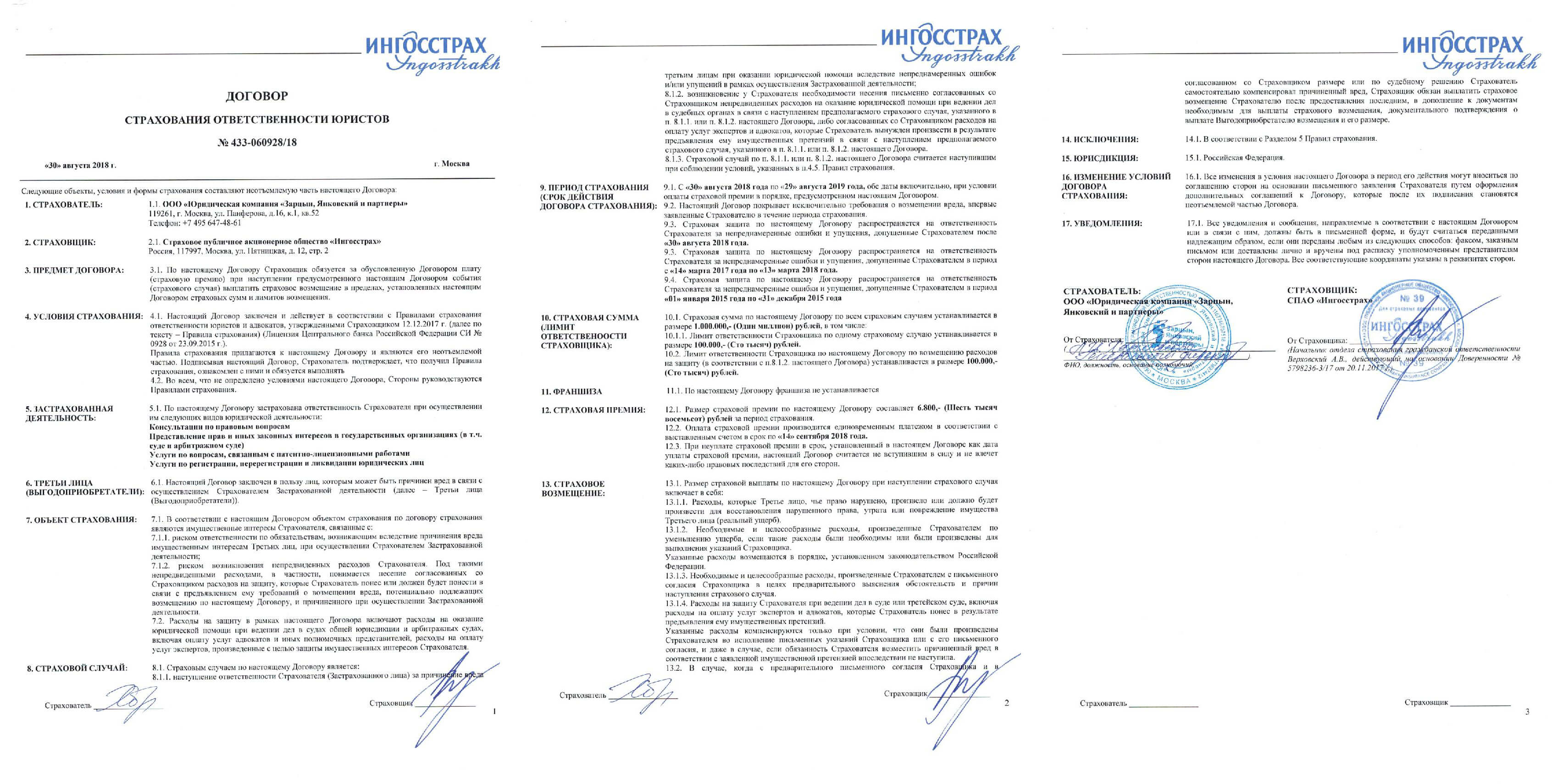 Venturing in legal way: fines and fees in an investor agreement

There are some Civil Code references in the article, so here's a legal disclaimer. As usual, the article is translated from legalese to a regular human language. We don't aim to specifically describe all legal grounds and responsibilities, we don't focus on penalties and so on. That being said, it's not because the author is legally illiterate. Sooner we're trying to keep it as simple as possible for the vc.ru. mass audience. C'est la vie, dear colleagues.

So, what is liability?

In two words, liability can be different: there is a criminal (this is when you go to straight to jail), administrative (if, say, one violated traffic rules) and civil liability. We shall focus on the civil one, namely violating agreement terms. There are other types of civil liability, e.g. when a cat ate up your neighbor’s sleepers without any agreements.

So, what happens is you default an agreement? Say, it was worded as usual: “For breach of Contract, the Parties shall be liable under the law,” the standard clause of article 393 of the Civil Code applies: "The Debtor is obliged to compensate the Creditor for losses caused by the failure to perform or improper performance of the obligation." Losses are real damage plus lost profits. Let me explain it to you.

Say, I wanted to organize a wedding for two bearded hipsters, who'd burn some stakes and treat some guests. The hipsters never showed up and I had to hire neighbors to play the part and some hot dogs to grill. The money spent on neighbors and hot dogs is the actual damage. And the unhappy guest who had to eat burnt hot dogs instead of juicy steak are the lost profit, which is so difficult to prove and define.

First of all, it's real hard to prove the size of the lost profit. Secondly, there has to be a guilty party to it. Sure, there's guilt in civil right: if the beardies prove that “with the degree of care and prudence required by the nature of the obligation, they took all measures to properly fulfill the obligation” (again the Civil Code), I won’t be able to collect anything. For example, if they say that I did not specify the wedding venue and instead of the Airport metro station, they arrived at Sheremetyevo Airport. Sounds absurd, but still theoretically admissible.

Now imagine that instead of beardies we have a startup, and I am an investor. I invested money provided that certain KPIs are achieved. Indicators are not achieved, I sued, but what to prove? Lost profit? Profits cannot be verified, half of the startups show worse results, and I am “lucky” to have any. Real damage? The startup founder can easily prove that he "took all the necessary measures," and this shall be true.

Penalty is no solution here.

In this case, we can include a penalty clause in the contract. It can be named differently: a fine, a penalty. But the meaning is the same: one party must pay compensation to the other party if the obligation under the contract is not fulfilled. And at that one doesn't have to prove the occurrence losses. The onset of the event means the party has to pay damages. Of course, the penalty, unlike losses, can be determined in advance by specifying the amount.

However, it is not so simple. In particular, the court may reduce the penalty if it considers that it is “clearly disproportionate to the consequences of the violation of the obligation” (Article 333 of the Civil Code of the Russian Federation). Therefore, a large fixed penalty is not yet guaranteed protection against breach of contract.

Another thing: the penalty should cover only the actions of the parties to the contract. If third parties intervene, it is impossible to demand that the party compensate them. On the one hand, it's only fair, but on the other - for example, if the tax claims are made that were caused by the startup founder, you cannot force him to compensate them. You can recover some fixed fine for violations, but you cannot tie them to the requirements of third parties, because, say, the same tax authority is a state body, not a party to a contract.

The third problem is the use of both penalties and damages since they apply only to the existing contract. If the contract has not yet been concluded, damages cannot be claimed. Where would they come from? Imagine: A startup is negotiating with several funds, and one of them is ready to make a deal. All other proposals are withdrawn, the startup is preparing to sign an agreement, but at the last moment the investor refuses. Months of preparation, labor costs and the refusal of other people's offers cannot be compensated by the startup, because the investment contract has not yet been signed.

It's really difficult to cut the penalty. Changes in the Civil Code which directly prohibit courts to reduce fines in contracts with investors have not yet been adopted. You think it's good and fair? Not really.

The risk of cutting the penalty is borne not only by the investor. The more the risks, the less investors are willing to invest in startups, especially in the seed stages. That is why more contracts are concluded in English law, where you can provide for such fines. But this means that transaction costs increase: money sits in the pockets of clever lawyers, instead of going into business.

The problem is also that there is no legal precedent on the new provisions, namely assurances, corporate contracts and other things, which means that the court decision can be unpredictable. In such a case, the investor and the startup are not interested in bringing the dispute to court to figure out who caused what damage on what conditions and whether they were fair or not. It is much easier to establish a large fine in the contract and tie it to specific facts. Then even the controversial contract can be protected. That is, of course, if the court does not reduce the penalty.

However, there is good news. First, since the spring, the parties may conclude an “agreement on compensation for losses” (article 406.1 of the Civil Code of the Russian Federation). The point is that if the startup has lied in assurances, it is possible to recover from him not only a fixed fine, but also some compensation for new expenses. Say, a startup claimed that there was no tax debt, but a year later he was assigned a huge fine. Now this is solved not through complex penalties, but within the framework of the agreement: the startup founder does not just guarantee that he has no issues, but also takes full responsibility.

Article 434.1 “Negotiations on the conclusion of a contract” also appeared in the code. First, the losses can now be repaid even before the conclusion of the contract, if the other party acts in bad faith. Secondly, it is possible to conclude an agreement on negotiation and establish an additional penalty for breaking negotiations without a reason there (without ascertaining good faith and other matters, but on the fact of violation).

The venture business is specific, so it is easier to break off a relationship with an unfair partner than to punish him with fines and other penalties. However, it's difficult to sell a share in a startup at an early stage, because one needs to find a buyer who agrees to enter a sinking startup with a shareholder conflict.

Therefore, not a sum of money, but a share in a company can be used as a fine. Here's the principle: you've seriously violated the contract - you buy my share from me, and I'm leaving. This condition is made through the option (article 429.2 of the Civil Code of the Russian Federation), but not the one for employees (small contract for some three shares), but through a large option for the entire stake in the company. Such a "punitive" option is called a penalty.

Penalty options can be entered both on shares and on stakes in an LLC, and the onset of any circumstances or simply the desire of the party to the contract can be set forth as a term to the contract. Of course, the price, unfavorable for the faulty party, is set in advance.

So, a penalty option is a punishment by buying or selling shares at a predetermined price. However, call options (you violated the condition - I buy your business) are rarely used. Venture investors are not interested in managing a startup and prefer, on the contrary, to leave the business during a conflict (put option where you broke the rules - you buy my share). This is a certain analogue of the liquidation privilege we discussed in the previous article: a bad event occurs, and the investor gets the money back. By the way, this year the Russian court executed a penalty put option for the first time.

In this and three previous articles I briefly described the startup cycle: from due diligence to exit.